The Whaleshark has about 3,000 tiny teeth, but their favourite meal is Plankton!

The first recorded landing in the Cape Range area was by the Dutch Captain Jacobz in 1618. Australian Captain Phillip Parker King later visited the area in 1818 and named the peninsula North West Cape.

In subsequent years Pearl Luggers visited the area from Broome and during WWII, around 1942 the area became important when the US Navy established a submarine base under the code name “Operation Potshot”. 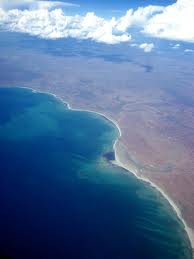 The town of Exmouth was constructed in 1964 at the same time as the Harold E. Holt naval communications station to provide support to the base and to house dependent families of U.S. Navy personnel. The U.S. turned over control of the station to Australia in 1999 and withdrew all its personnel. Today the population of Exmouth is around 2000, however, during the height of tourist season it can reach 6000.

The communications station provides very low frequency (VLF) radio transmission to United States Navy and Royal Australian Navy ships and submarines in the western Pacific Ocean and eastern Indian Ocean. With a transmission power of 1 megawatt, it is the most powerful transmission station in the Southern Hemisphere. The VLF antenna array covers one thousand acres – the largest in the world. There are 13 towers in total, ‘tower zero’ is 387m tall, it was the tallest man made structure in the southern hemisphere when constructed.  The building around the towers is six stories tall, making it the tallest building in Exmouth

On 22 March 1999, Tropical Cyclone Vance reached category 5 status as it made landfall near Exmouth. This resulted in the highest ever wind gust reported on the Australian mainland at the time, of 267 km/h at Learmonth, only 35 km to the south.  (However the wind speed recorder blew off ten minutes before the cyclone reached its peak, so the actual maximum windspeed is unknown.) A glass bottomed coral viewing boat rolled like a ball from Bundegi Beach to near Tantabiddi, with parts of the outboard engine was found 120m up Tower Six aerial. Caravans were found on top of pylons, huge fishing boats lifted over 6m pylons. (There was also a rumour that the world record for the fastest flying emu was recorded at this time, but this remains unsubstantiated…;-)